Okay I’m glad some other folks are on the same page haha. Always makes me a bit nervous to express my opinion. I just think it’s good to be honest.

It definitely seems like Reactions is competing with Houdini, and I don’t think this is the way to go. I think it will lose a lot of users going this route.

I think Reactions is a response to EmberGen coming on to the market, rather than Houdini…

Regardless of what its being done in response to on the market, its missing the target for existing users of TFD 1.x.

Yes, the workflow will get easier. It is a definitive goal to make it as straight forward as TFD - or easier where possible - but also allow for more options and presets.
The last few updates have been light on workflow changes, still focusing mostly on the backend. Workflow features will come into focus more during the next updates.

For example, the basic TFD setup is

Unlike the TFD Container and Tag, the Template already came with basic settings for a specific effect. You thus get a head start in tweaking the sim.
If you prefer a generic default setup like in TFD, there will be a Template that creates a generic setup like in TFD.

One thing to note is that you will never have to open the node editor to do anything that you could do in TFD.

Don’t be, i value your feedback. Everybody likes praise, but constructive criticism is what’s actually valuable.

Reactions is not intended to compete with Houdini as an app. That would be silly

It aims to deliver several long standing and often requested features that TFD couldn’t. Chief among them are what most users think of as presets. The trick is to create a preset for an overall effect that is a combination of settings for emitters, simulation and shading. That’s what Templates are. They create one or several objects, tags and materials in one click.

Thanks so much for your response to this. Looking forward to how this all turns out.

The sim video included in the last beta update was very impressive by the way!

I’ll piggy back off what alot of you are saying. TFD out of the box is SOOO nice with Cinema. Userfriendliness is HUGE with everything else already being so difficult, but I understand with great power comes great… learning curve sometimes.

I’m fully cool with it being advanced AF if it has the added power, BUT there would definitely need to be some sufficient presets and training added.

Embergen is doing great with adding over a hundred nice presets that get you in the ballpark to where you need to be with certain things not to mention it’s speed, and they’re pushing this year for a fully integrated C4D version as well. I would say stick to TFD roots make it more awesome, but the current functionality of TFD is awesome, so I wouldn’t want to lose that.

I understand some parts of what Jascha go through. The balancing between node and parametric are really time consuming. All of this need more time. Plus, sometimes, there are always the complex effects that it only can be done with node. Cinema 4D is the most friendly 3D app I ever seen. Tt makes full use of the power of layers. But then finally, it still have to build its own Scene node system because it can not fulfill the need of The demand for sophisticated, complex effects in the market is increasing. That’s why Maxon try to balance both and I think Jascha 's doing this, too.

so is there going to be a TFD version 2 as a big upgrade? Or is Reactions turning into what TFD 2 would be?

I’m curious as well, but I feel like the answer is that Reactions is the next version. I see a lot of power and interesting additions but there will definitely need to be some learning applied. It would be awesome to see a TFD user course from TFD to REACTIONS processes and ins and outs so we could get a good outlook on what the shift entails and the updated functionality.

There will be no TFD 2 only Reactions.

I’ll be making a course for Reactions once 1. It is reached final release form 2. I finish this TFD v1 project I am on. As Jascha has marvellously stated that all TFD users will get a free upgrade to Reaction I have decided to follow that lead and will be offering a a 10% discount for all owners of my TFD1 series probably done by coupon which will be a word derived from one of the tutorials.
These tutorials are of course still valid and I think for 13 hours I am selling them at a fair price. I have a 45 min freebie so you can check if you can handle my cockney accent and style, I did not script these tutorials and simply did them live off the bat. 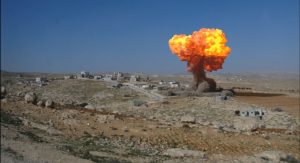 The new update v0.2.6 brings the workflow closer to its goal of being familiar to TFD users. Let me know what you think:

I did have a chance to play around with the new beta yesterday. It certainly felt better. The included demo video was quite nice. I played around with the two presets too (explosion/flamethrower). It’s awesome to see the shading in the viewport!

The tags are still a bit overwhelming, but I suppose there’s a learning curve that comes with it. A lot of different attributes to adjust. Will it be further simplified, or is this pretty much where it will be? I do think Paul’s training will help.

I also noticed that after I had cached out the simulation in the viewport and moved around, at a certain point, the viewport would go black. It would show just an outline of the sim, but everything else black. I’m using R21.

Just curious what else is planned for Reactions? I think you had mentioned there will be more presets? I think these will be quite helpful as a starting point. Starting from scratch is a bit overwhelming.

There are more simplifications coming that can bring the complexity down to “Asset” level. That is, theoretically this could be as little as a single object, no tags and a small number of parameters for art-direction.

The current templates provide all available controls. The tags may look like a lot at first, but they basically just add icons to attribute tabs. The complexity is comparable to TFD. TFD has 14 attribute groups for several different tasks lumped into the Simulation tab. In Reactions these groups are divided into 6 smaller tabs, each with a more specific concern. It basically puts stuff into several drawers instead of one big pile

I wasn’t able to reproduce the black viewport issue on R21 yet. If you come across it again, please describe the steps that reproduce the issue. Thanks

There will be more Templates both with full controls as well as simplified asset-like setups. There are also going to be Presets on a per-object/tag/material basis. Presets may be particularly useful for the Volume Material to quickly switch between different looks.

Thanks Jascha, this is sounding very promising. I especially like that you’ve added your own particle emitter system that can be art directed (I think?) Unlike the standard particle emitter inside C4D. I’ve gotten into a bit of Thinking Particles, but it’s not the most user-friendly haha.

I’ve recorded a video showing what is happening with my black viewport. By the way I’m using a 2080TI with the latest NVIDIA studio driver.

Personally I don’t mind more tags and processes if it’s intuitive and functional. Learning curve will be the only area of concern and a handful of well developed scene files can help mitigate that for sure. The beauty of it is working within a scene structure you can suddenly generate fire smoke volumetrics to react at will without the hassle of a 3rd party Export import and without diving too deep into the weeds right now with traditional TFD. I love it, and if a few more tags are needed but reactions shares that same overall execution I can get behind it for sure. I haven’t really dove in to take much more than an initial look at this point would it be safe to say the current reactions beta is close to the first release in terms of functionality and tags/layout or is all of that still subject to change?

Thanks for the video. I’ll try to reproduce this and get it resolved.

Yes, the particle system provides several basic operations like Wind, Drag, Turbulence, Gravity, etc. More will come. The main reason for it is to have the entire simulation be able to run on the GPU. Bridging other particle systems into the sim takes a disproportionate amount of runtime.
Of course now that we have that particle system, we might as well use it for other things. It can run tens of millions of particles in real-time on current GPUs, so it’s fun to play with. At this point the functionality is focused on uses as fluid emitters, though.

One major design goal of Reactions is to make more re-use possible. In TFD you often repeat very similar setup steps before you can do your scene-specific art-direction. Instead, ideally you would just pick a pre-built template (a default or sth. built by yourself) and go directly to art-direction.

There is still more functionality coming, especially more templates for different simulation types. But more and more things are settling down. For example, most of the tags are probably not going to change much anymore.

A post was split to a new topic: Collision Objects