Please read, this will help X-Particles users for future projects.

In a previous post dated last week, I was trying to find a way to have Turbulence FD not affect all the X-Particles Emitters in the scene, similar to Explosia FX when dragging a modifier in the excluded list. Well as it turns out…you can do the exact same thing with Turbulence FD. I just never thought to do that, and this discovery was by accident.

In the old post, I said you had to cache the sim twice, one with particle velocity to 100 and one without-followed by a long string out process, but that’s not necessary, and you shouldn’t do that.

If you look at the screenshot below, the ball is the emitter source for Emitter A, Emitter B, and Turbulence FD. To have TFD only affect Emitter A, all I have to do is go to Emitter B, go to Modifiers, and drag the TFD container into the Modifier list, and uncheck it. And as you can see…Emitter B [the particles falling] is not being advected. This makes the workflow exactly like Explosia FX. Amazing, simple, and easy.

I hope this helps out other users in the future.

Side note for XP users: If you look at the screenshot, I have the TFD container in the Modifier List, that is because in the XP Object Settings, I have “Only Modifiers & Deformers in Same System” checked on. When I did this, the particles were no longer being advected, unless I place the TFD container it in the XP System Hierarchy. This is when I realize that X-Particles recognizes TFD as a Modifier…mind blown! 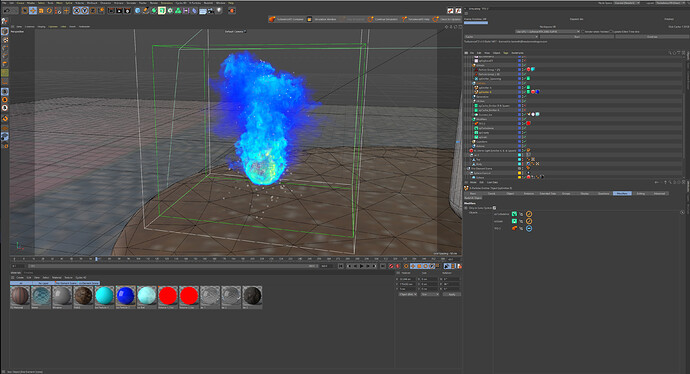 Great tip! Although I almost never use TFD for advection cause explosia can do that with more attributes supported + is not as heavy as TFD cached with velocity on.
But great tip, there is also a bug where TFD cannot emit per particle size, already reported it few months back, keep that in mind.
Thanks again great tip!