Yeah the bcf2vdb converter loads and always has. I followed at least 6 youtube videos going through the identical process you have outlined as well as manually entered the file paths and used the various flags noted in the help file with no success. As someone who regularly uses python in C4D and VEX in Houdini i’m very carful when it comes to syntax, file paths etc and cant figure out what’s causing the issue.

I had redo the simulation in Houdini and move onto a different deadline but this is still important for me to figure out as I paid for the plugin nd hate throwing away money for something that will just sit there. I can screen record my experience later und upload it when I can come up for air later.

Thanks for your help so far Jascha

So I Just started getting this message “Failed to locate TFD loader. Specify file with --tfd-loader option or run from inside the plugin package.” and that’s after following the exact steps outlined. Any idea what this means?

Here are some screen shots in the order I encountered them: 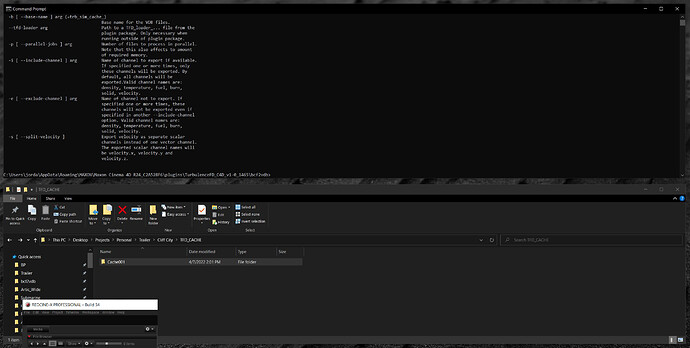 Note: I finished the job I had a deadline on in another package but here is a peek inside a different folder I used to test this process:

Thanks Jordan.
This looks like the TFD installation got corrupted somehow.
Please do the following to clean up the installation:

Note that you can also upgrade TFD to the latest v1.0 1483 installer, which makes the installation process more convenient, but you would have to re-run the simulations created with 1465 or earlier for the cache files to work. That’s why i recommend sticking to 1465 at this point where you have caches done and only need to convert them.

If your cache in D:/cache, just simply write this :

Hi! I am trying to do the same thing bcf2vdb for a Mac, I see the same things in the post except mine says something different at the bottom. But when I go into the folder no vdv files. 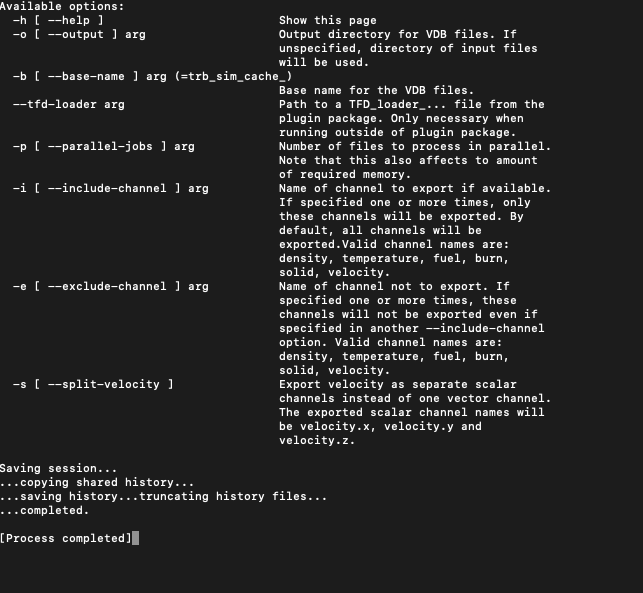 This looks like the cache path is missing on the command line. If you drag&drop the bcf2vdb to the terminal, before pressing enter, drag the cache folder you want to convert. The command line should then be two paths when you press enter.

If this does not help, please send a shot of the command line that produces this output.