Hi, is TFD scaling nice with many cores? Im about to get a new system (AMD ryzen or Threadripper) and i was wondering what is the gain i can get out of it. Any thoughts?

Yes, TFD will happily use as many cores as you can throw at it. The shot below is from a 3960X. Note that GPUs like the 1080, 2080 and comparable will still be much faster, though. This is because of the 5-10x higher throughput GPU memory has compared to any CPU.

Also, the 64-core Threadripper 3990X is unlikely to be of much of value to TFD because it has to feed its cores through the same 4 memory channels as the 24 and 32 core versions do (for comparison, Epyc CPUs have 8 memory channels). Data-heavy simulations, like voxel and particle sims, are mostly memory bound. That means that memory throughput is the bottleneck for their performance. 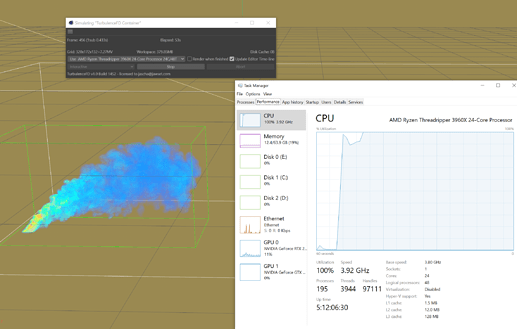 However renders will fly on a thread ripper and you could comp your AR renders onto a scene rendered in say Redshift, thus allowing the playing with the straight TFD render we all know and love. ( you could also of course do a GI render in AR and comp that pass as well) thus allowing all 64GB ( or more !!) RAM for the render

Thanks! So u think that the ideal TR for tfd might be tops the 32 core one?
Yea ofc gpus are a big deal, but running out of vram is something common when gpu caching.
Cheers!!

The 24 core version has the best performance per cost ratio. You could get slightly better simulation performance with the 32 core version, but nowhere near the 1.5x that the core count ratio suggests. Volume and particle sims are not likely to benefit a lot from the extra 8 cores. I’d suggest you look at benchmarks of non-volume renders to decide between the 24 and 32 core version.

I’m hoping to show the first TFD2 preview soon. That first-preview milestone has been slipping for a while, but once we’re there, the subsequent ones won’t we as evasive.

Thanks a lot Jascha! I ordered a ryzen 3950x eventually cause im not sure a higher budget cpu will help me in Xparticles / TFD / Realflow that im using. Hopefully it plays out nicely for the buck, and maybe we can setup some benchmark scenes in order to help future users.