it’s finally time for another status update. The long silence was mostly owed to the big GUI overhaul that entirely replaced the Qt framework (see below). This couldn’t be done iteratively, hence the lack of updates.
There is also a first version of renderer integration. According to the poll results from a while back, Redshift is the first engine to give Reactions the honor. Octane and Arnold will follow ASAP. 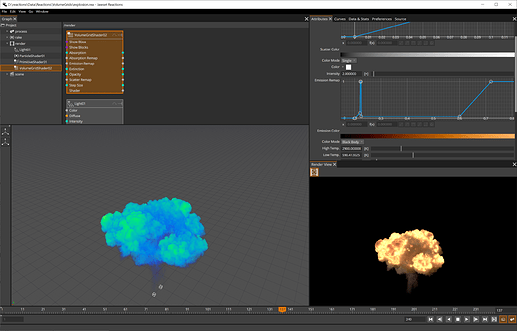 Previous versions of Reactions used the Qt framework to implement its GUI. Unfortunately, Qt has accumulated substantial bloat over the years, causing annoying performance issues, esp. on Windows. More performance is lost because Qt still renders on the CPU. That’s particularly notable on high-dpi displays. Qt has caused several headaches related to plugin integration in the past. And last not least, several of the UI features i envisioned for Reactions would have caused too much friction when implemented with Qt.

Out with the old, in with the new Reactions UI toolkit! Lean and optimized, renders on Vulkan, does what it’s told

A good indicator for UI performance of any graphics app is to resize the viewport or form-heavy views. Reactions now has the smooth and snappy UI experience you’d expect in this day and age. Especially if you have become used to the new C4D R21 UI, which is a similar improvement over the R20 UI.

Besides performance, another area that has improved significantly compared to the Qt UI is the docking of sub-views. We’ll probably have another upgrade that replaces the drop-zone hover effect with a squeeze-in animation similar to the Substance tools, but the main functionality is close to production.

Reactions unifies viewport and output rendering, such that rendering a “playblast” or viewport image sequence works the same way as rendering using Redshift. The render engine (ATM “Viewport” or “Redshift”) can be selected on the Attributes page of the /render folder.

IPR can be enabled in the Render View tab.

Note that Redshift renders only VolumeShaders at this point. Particles and Meshes will follow.

Reactions supports Redshift v2.6.48, such that it works with the currently available demo of Redshift. Simply install Redshift and (re-)start Reactions to make it available.

Below are the major upcoming topics. There are many others on the roadmap, but these days, i’m all about prioritizing pragmatically

Assets wrap multi-node networks into a single node. An Asset node exposes a selection of the wrapped nodes’ parameters. The result is something similar to a TurbulenceFD container in C4D. However, the TFD container is a kitchen-sink Asset that lumps all available features into one node. Reactions allows us to build more focused Assets that expose only parameters that are relevant to a specific use-case.

Presets will be stored/loaded per Attributes page. When applied on an Asset node, they can indirectly affect the parameters of any number of contained nodes, though.

Inside C4D, instead of one TFD Container object, you’ll have a selection of different Assets to choose from. One of which is likely be similar to the TFD1 container.
The Graph Editor will also be in a popup window similar to how shader and Xpresso graphs show up in C4D.

There are many pending simulation features, the top 3 is currently:

Here is the updated explosion example rendered with Redshift: